US Congressman Re-Introduces Bill that Seeks to Protect Blockchain Innovation 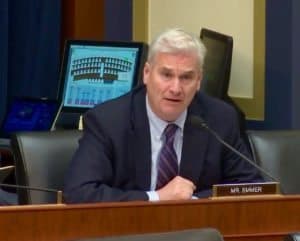 Congressman Tom Emmer has reintroduced the Blockchain Regulatory Certainty Act along with Congressman Darren Soto. The legislation aims to address Financial Action Task Force (FATF) proposed guidance that could stifle blockchain innovation in the United States and elsewhere. FATF has advocated for stricter regulation of “virtual asset service providers” or VASPs including the tracking of buyer and seller information that may be accessed by regulators.

“The Blockchain Association is proud to support the reintroduction of the Blockchain Regulatory Certainty Act. By providing commonsense regulatory guardrails, this legislation goes a long way in ensuring the U.S. remains at the forefront of crypto innovation.”

Perianne Boring, founder and President of the Chamber of Digital Commerce, also voiced support of the legislation stating “now more than ever, it is vital that we develop regulatory clarity for blockchain developers and service providers in the United States.”

In brief, the legislation states that no blockchain developer or service provider will be treated as a money transmitter nor financial service.

“Blockchain service providers need clear rules of the road to be able to develop and invest in the United States, and this clarity is more necessary than ever as the FATF tries to encapsulate more non-custodial blockchain developers in the money transmission system. For the future of blockchain, Decentralized Finance (DeFI), and America’s support for innovation and emerging technologies, it’s imperative that we provide the framework for this technology to thrive, without being limited by outdated rules and overregulation.”

Emmer added that the US should prioritize blockchain development, and not stifle it, because of the promise of the technology.

Congressman Soto said the legislation was timely following the infrastructure bill that incorporated restrictions on cryptocurrency.

“Custody is an incredibly important issue that needs to be considered when defining which regulations apply to who. I’m a proud supporter of Rep. Tom Emmer’s bill that is a step in the right direction policy-wise and provides helpful regulatory clarity for innovators in the ecosystem.”

It was not immediately clear if the legislation would garner sufficient support to move forward in the House.