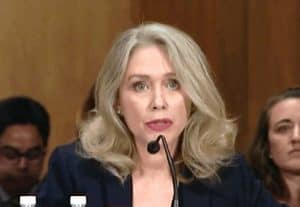 SEC Acting Chair Allison Herren Lee commented on the agency’s role in looking into the matter.

The dramatic gains in shares of GameStop have completely changed most people’s understanding of what can actually happen in stock markets. This seems to be stemming from various communities on Reddit and by the use of highly-popular trading apps such as Robinhood, which has notably secured large amounts of funding to expand its operations.

Although investors and other market observers have been trying to figure out what really happened, the US government may have a more serious obligation to make sense of the situation. That effort is expected to be led by the US SEC. And the acting SEC chair is Allison Herren Lee.

In statements shared with NPR, Lee noted that getting more information into the markets is “a good thing” and “something that we all strive for.”

Responding to a question about what the SEC might do to identify any wrongdoing in the recent run-up in stocks like GameStop, Lee said that the agency is mainly “looking at this from a number of different angles, and they’re very significant.”

“We need to look closely at the conduct of certain – of the broker-dealers, those financial intermediaries through which retail investors access the markets. We need to make sure that the decisions that they make when they look to restrict or limit trading are compliant with regulations, that they’re transparent to their customers and that they’re consistently and fairly applied. So that is sort of a job one that we are working on.”

She also mentioned that “with respect to potential manipulation in the markets, that’s another area where – this is our bread and butter at the SEC.” Lee claims that the agency knows how to take care of these issues. She acknowledged, however, that these new cases have “a little bit of a different spin” to them. Lee believes that it’s “going to be a little bit more challenging because of the nature of it, but our enforcement division will rise to that challenge.” She revealed that the SEC is working on it “around the clock right now to figure that out.”

She added that “one third area that we’re looking at very closely, and that is these issuers.”

She claims that there’s (for the most part part) “no new information in the market from these issuers.” However, the SEC is focused on ensuring that as they “look to what they’re doing, whether or not they are trying to raise money in the middle of this.” And if that’s the case, then are they able to “adequately disclose the risks associated with that?” And “are insiders in these companies trading?” She confirmed that the SEC is looking at this from “a number of different angles.”

Responding to a question concerning market manipulation, and about situations where you may be betting against a firm in a manner that’s similar to how  hedge funds did with GameStop, Lee noted:

“We all know that shorting can serve some very important purposes in terms of hedging and … just taking a view on the value of a company. But it can also jeopardize market integrity. So we are examining what role that may have played in the recent events, and we’re looking at all the implications there. For example, how well are the existing regulations and transparency requirements being enforced? And do we have sufficient data on short positions that are held by significant market participants? And do we have sufficient guardrails around those to address market risks that we may identify?”

She added that “the more things change, the more they stay the same.”

“I have watched the tried and true principles upon which the SEC is founded – I have watched them work well for decades. … We understand how to adapt. We have an extremely expert staff who has seen decades of different types of misconduct taking different forms, but they fit into some pretty predictable buckets. So, you know, I think we have the tools, and we are using them.”

In response to a question about how concerned the SEC might be that all of this upheaval might result in bringing down the larger market, where many individuals maintain their retirement savings, Lee said:

“We have seen nothing to indicate that that might – that – you know, these are a few different names. We’re looking closely at those names. I haven’t seen anything that suggests that it would bring down the market. …. we have to be focused on anything – when we see stock prices depart so widely from fundamental valuations, we know there is a chance that people are going to get hurt, if not almost a certainty. So we want people to know that there are risks involved here. We want to educate them on those risks. And we don’t want people to be making decisions – investment decisions based solely.”