With the post-election drama behind us, we finally feel comfortable looking to the future.

We’re finally ready to consider the impact the new administration will have on the markets — and most importantly, the impact it’ll have on specific sectors and investments.

Based on President Biden’s first full week in office, we’re already seeing strong signals about where we should be investing in 2021 and beyond…

And today, I’ll talk about one sector in particular.

As you’ll see, this sector already had significant momentum going into 2021…

But thanks to Biden’s new executive orders, it could explode over the next 12 months.

A New “Climate” in Washington

From the beginning of his campaign, President Biden promised that climate change would be a central focus of his administration.

And with a flurry of first-week executive orders, he’s already fulfilling on that promise.

First, he issued an order to pause all new oil and gas drilling leases on federal land…

Then, he halted construction on the controversial KeystoneXL pipeline…

And finally, he indicated the U.S. would rejoin the Paris Climate Accord, with the goal of making the U.S. carbon neutral by 2050.

These orders will have a significant impact on the energy markets.

For coal, oil, and gas producers, that impact will be extremely negative…

However, for another corner of the energy markets, the impact will be very positive…

I’m referring to the clean and renewable energy markets.

As developed countries continue to shift away from fossil fuels, energy sources like wind, solar, and alternative fuels could see a massive surge in demand.

In fact, this trend has been taking shape for some time now.

In 2020 alone, we saw stock prices for many of the largest players in this space soar.

For instance, Enphase Energy (ENPH), which makes home energy management software, has seen its stock jump by 600% in the past 12 months: 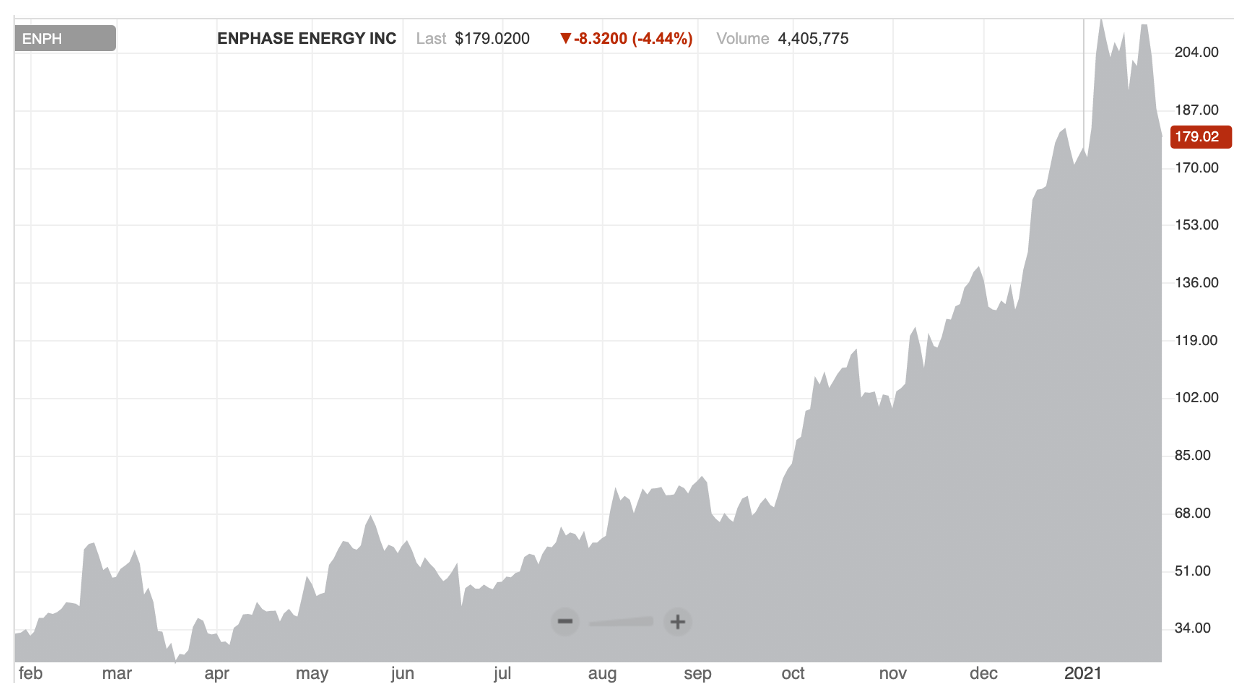 And SolarEdge Technologies (SEDG), a company that provides power optimizer, solar inverter, and monitoring systems has seen its stock rise by about 300% over the same time: 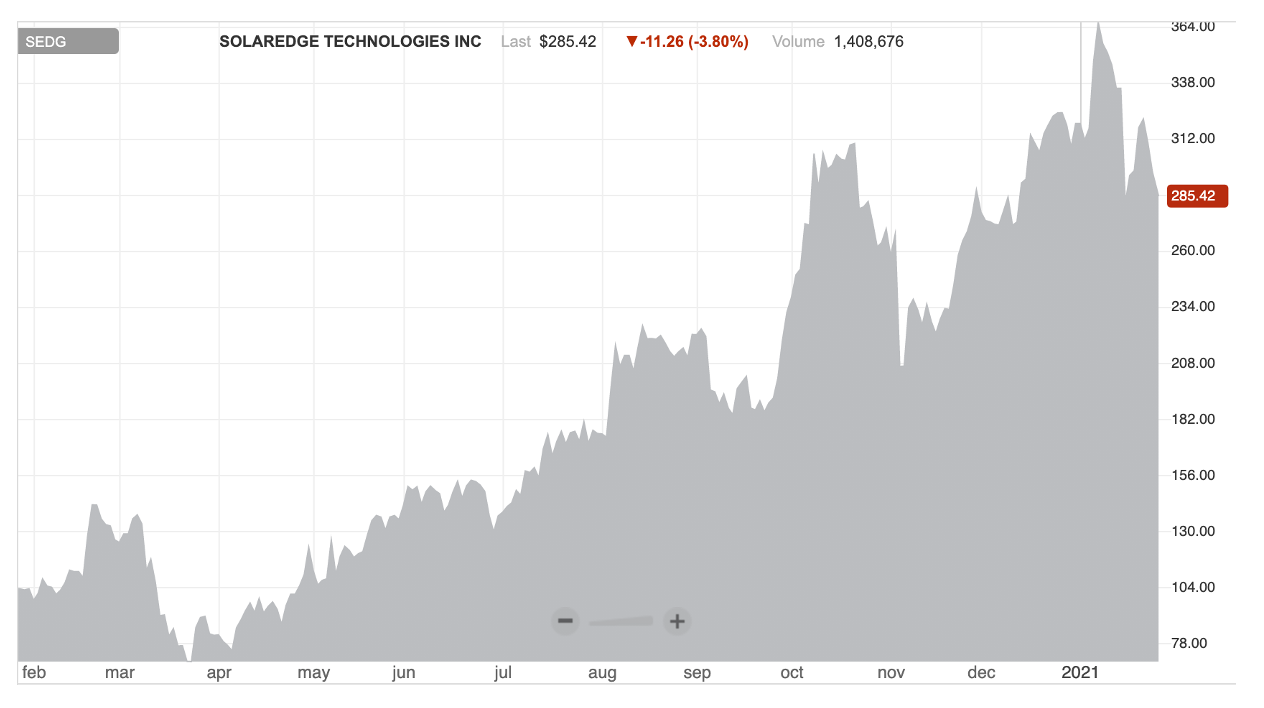 And the same thing has happened across the broader clean energy sector, as you can see from the iShares Clean Energy ETF (ICLN): 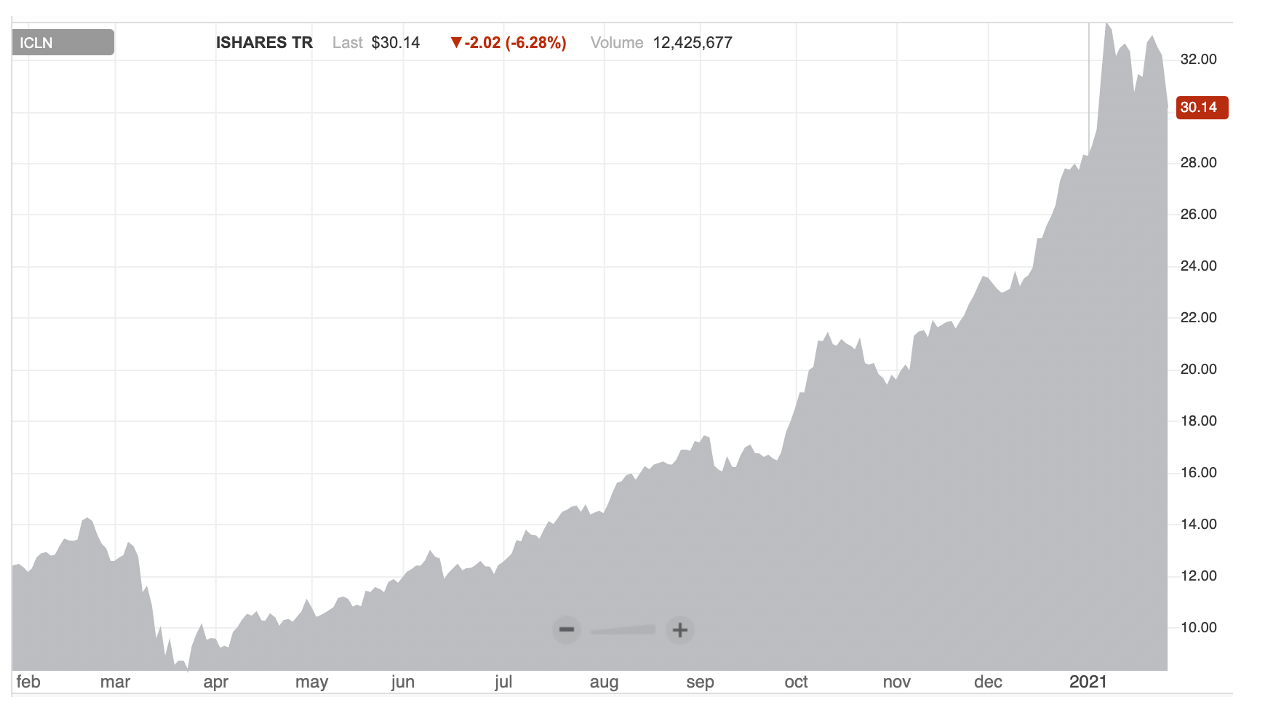 These are fantastic returns…

And based on the new administration’s plans, we expect them to continue well into the future.

You see, as we always like to remind you…

If you want to earn the most profits, you should get into big trends as early as possible.

Sure, investors in public stocks can do pretty well…

But the lion’s share of profits will go to those who get in BEFORE these companies go public.

In other words, you should invest in clean energy companies while they’re still private startups.

And we’re not the only ones who feel this way…

More recently, a group of some of the largest private investors in the world — institutions like NEA, WestCap Group, and Brookfield Asset Management — announced a $1 billion investment into another clean energy lending company called Loanpal.

The list of recent private investments in startups focused on clean energy goes on and on.

That’s why, according to market research firm, PitchBook, the year 2020 set a new global record for investments into clean energy startups.

How You Can Get Involved

If I were writing this article several years ago, I wouldn’t have mentioned all this private investment activity.

Why? Because back then, you couldn’t have invested in early-stage private deals!

But thanks to a recent regulatory change, now you can invest in such deals — and you can do it online, from the comfort of your living room.

For example, a clean energy startup called Manta Biofuel is raising capital from investors like you right now.

Manta is developing a new type of fuel. Instead of using carbon emitting materials like oil or coal, its cost-competitive and renewable “biofuel” is powered by plant-based algae.

The company has already attracted funding from the U.S. Department of Energy, and it’s already generating sales.

If it succeeds, it could dramatically disrupt a market worth more than $2 trillion annually.

To be clear, we’re not recommending you go out and blindly invest in Manta.

Before you decide to invest in any startup, you need to do thorough research.

And remember, to minimize your risk and maximize your profits, you need to build a portfolio of startups over time. Don’t ever “bet it all on black”!

With that being said, if you’d like to learn more about Manta Biofuel and consider an investment, you can do so here »