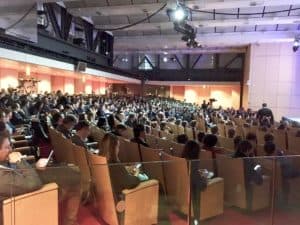 Milkomeda said it addresses scaling issues seen in several new blockchains by building out sidechains with alternative virtual machines connected to the Layer-One mainchains which use those chain’s native cryptocurrency as their base asset. They also plan on developing what they call wrapped smart contracts.

“With wrapped smart contracts, the L1 blockchain becomes a robust coordination layer that users stay on while executing smart contracts on the sidechain without having to move over to the sidechain themselves,” dcSpark said in a statement. “This brings novel UX to the table for end users, wherein for example they will have the power to execute smart contracts on an EVM sidechain straight from (another blockchain’s) mainnet (likewise in any other L1 deployment) without having to switch wallets or even know what is going on behind the scenes.”

“We believe that providing such flexibility and power to end users will set a new standard for some of the most promising smart contract enabled blockchains and their ecosystems at large thanks to Milkomeda,” said Robert Kornacki, CSO at dcSpark.

Milkomeda will first be deployed on Cardano. The EVM-based sidechain which will connect directly to Cardano will be named M1, and will be both the very first Milkomeda sidechain as well as the very first Cardano sidechain. It will use wADA as its base assets, and the Milkomeda validators who run the sidechain will be selected from existing stake pool operators and other trusted entities within the ecosystem.

dcSpark plans future deployments of Milkomeda to produce interoperability between Cardano, Solana, and other Layer-One blockchains as well.

“With the initial launch of the protocol and the M1 sidechain we are excited to be a part of bootstrapping Cardano’s sidechain era as a first step for Milkomeda,” dcSpark CEO Nico Arqueros said. “Furthermore, by bringing a new piece of game changing tech onto the scene, wrapped smart contracts, we are excited to be on the front line pushing the vision of multi-VM blockchain ecosystems and making it a reality. We believe this is an inevitable direction wherein L1 blockchains, like Cardano and Solana, have their strong security guarantees act as a backbone and coordination layer for a diverse ecosystem of many smart contract languages and virtual machines.”

“Interoperability is crucial for mainstream blockchain adoption; at IOHK, we don’t believe there will be ‘one blockchain to rule them all’, and instead value collaboration,” IOHK CEO Charles Hoskinson added. “When it comes to interoperability and scalability, sidechains are an essential part of our vision for Cardano. We’ve pioneered research into proof of stake sidechains, and recognize how important they are for interoperability within our industry.

“Milkomeda is a valuable addition to the Cardano ecosystem, as it will allow developers to benefit from Cardano’s speed, security and lower costs, without needing to switch wallets, or navigate a completely new operating system.”