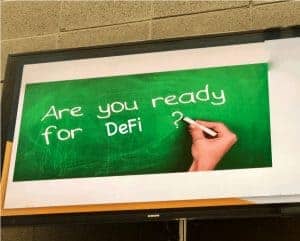 Fintech Collective, a VC company that’s focused on creating the “future” of financial services by investing across traditional Fintech and emerging crypto-assets, revealed on Friday (August 20, 2021) that it has raised capital, as part of its existing early-stage strategy and for its new strategy “focused on decentralized finance (DeFi).”

FinTech Collective raised a total of $250 million in funding across the two strategies, bringing the company’s total assets under management (AUM) to $500 million+.

FinTech Collective backs business owners and entrepreneurs who are focused on “rewiring how money moves through the world and invests thematically and across capital markets, wealth and asset management, banking-lending-payments, and insurance.”

The company acquired $200 million “to focus on early-stage investments as well as $50 million focused on open-source, composable financial protocols and applications being built on smart-contracting platforms such as Ethereum.”

The DeFi strategy will aim to invest across the wide range of opportunities “emerging in the decentralized finance space – including both equity and liquid tokens.”

Established in 2012, FinTech Collective is being led by Managing Partners Brooks Gibbins and Gareth Jones, who have worked closely for over 20 years as entrepreneurs and operators in the Fintech sector, having established and sold 4 businesses for proceeds of over $1.5 billion.

FinTech Collective invests globally and has 53 firms currently operating in the US, Latin America, the UK/Europe, and other jurisdictions.

The company’s exits include Quovo to Plaid, Reorg Research to Warburg Pincus, and MoneyLion, which announced it will “go public through a merger with the SPAC Fusion Acquisition Corp. in a $2.9 billion deal.”

As stated in a release:

“In FinTech Collective’s current portfolios, 20% of the investments are blockchain and DeFi, including five fintech unicorns, which are valued at more than a billion dollars. The firm’s “hit rate” (companies that are still active) currently stands at 96%, which is notable for the fact that two-thirds of those initial investments were into pre-revenue companies.”

“FinTech Collective was among the first venture capital firms to recognize the fintech opportunity resulting from the global financial crisis, which served as a catalyst to unlock a generation of innovation in financial services. We believe the next 30 years represent an unprecedented period when every facet of financial services will be deconstructed and reconstructed, and our deep global roots, particularly in the New York and European ecosystems, allows us to take advantage of this tremendous opportunity.”

“We partner with exceptional entrepreneurs by providing deep fintech and operating expertise and capital to those who share our vision for reshaping the future of the markets. As one of the few truly global fintech investors, we see massive opportunities taking shape over the next decade, including the continued development of the digital assets landscape, where a new monetary system, method of transaction, and digital store of value is being established. We anticipate the convergence of traditional finance and DeFi, which is a particularly exciting space for us right now.”

As previously reported, FinTech Collective is an SEC-registered investment adviser and global VC company focused on tech startups with “the potential to reimagine financial services.”