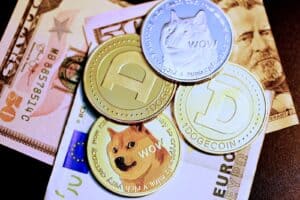 While DOGE could hit at 42 cents by the end of 2021, the increase won’t last long, according to the average panel forecast in Finder’s Dogecoin Price Predictions Report. In fact 80 per cent pf panelists believe DOGE is a bubble.

“I would expect DOGE to grow in tandem with the rest of the rapidly growing crypto market, though it will likely have long periods of flat price action followed by violent speculative pumps like we’ve seen in the past,” Token Metrics senior cryptocurrency investment analyst Forrest Przybysz said.

Allnodes founder and CEO Konstantin Boyko-Romanovsky thinks DOGE will be worth $0.50 at the end of 2021, with the bubble bursting in 2022. He believes DOGE may not exist in 2030 due in part to its lack of utility and potential.

“Dogecoin seems largely dependent on Elon Musk’s erratic tweets. It is barely used as a payment instrument and has proved a very poor store of value,” Hawkins said.

CEO of Cake DeFi, Julian Hosp, and cofounder of Trade The Chain, Ryan Gorman, had two of the most bullish 2030 price predictions of $5 and $3; both citing “pump and dump” as the reason for price gains. Gorman said “con artists will continue to pump and dump this scam coin until it is outlawed”.

“…People who speculate on it should not be surprised if they lose their money, after all it’s a doge themed meme coin that was created in a few hours,” he said.

Zeppettini is part of the 38 per cent who don’t think DOGE or other meme coins are undercutting the legitimacy of the cryptocurrency market. Finder founder Fred Schebesta is another.

“Bitcoin holds the crown as store of value. Doge holds the crown as a meme. No other blockchain has claimed a crown for the purpose it stands for. Like it or not, Doge is here to stay, even if it’s just for a good joke between long-term crypto fans. The cryptocurrency market does not care if people understand, support or deny legitimacy – it speaks only by way of money, innovation and adoption.”

While 38 per cent believe meme coins are not undercutting the legitimacy of the cryptocurrency market, 46 believe they do. COO of BitBull Capital, Sarah Bergstrand, said meme coins with little to no utility or use cases are bound to lose value over the long run and damage the image of real assets with real value, a sentiment echoed by research analyst at CrossTower Martin Gaspar.

“It demonstrates that coins with little use case and development can attain valuations greater than that of legitimate cryptocurrencies,” Tower said.

“It is embarrassing to see good projects with thousands of working hours invested in them, lose to a meme coin with good marketing,” he said.

A few panelists, including lecturer of law at the University of Liverpool, Matthew Shillito, and Przybysz, are unsure.

Shillito says memecoins have a role to play in attracting people to the cryptocurrency market, however he concedes some who have witnessed a DOGE price plummet may be more risk averse.

“…It is important to note though, that it is the price movement that is more likely to affect legitimacy than its appearance as a meme coin (and that other non-meme coins have seen similar rises and falls),” he said.

“While memecoins do not provide utility and diminish the overall perceived value of the crypto space, they are rapidly introducing a lot of newcomers to cryptocurrency,” Przybysz added. “All in all the pros and cons are probably a wash.”

You can read the full report here: https://www.finder.com/ca/dogecoin-doge-price-prediction