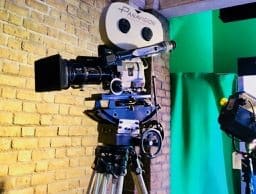 In a “first” for the film industry and the Liquid Network (a sidechain-based settlement network for traders and exchanges, enabling faster, more confidential Bitcoin transactions), the feature film Silhouettes will reportedly be issuing tickets as non-fungible tokens (NFTs) on the Liquid Network, by “using the LNFT platform.”

For around 43,000 sats, viewers will be able to gain access to “exclusive” digital collectibles along with “streaming access to the film.”

As noted in the update:

“Silhouettes is a sci-fi odyssey from the minds of director Matt Hartley and producer Shiv Rajagopal. The story follows an astronaut and her journey through space and time after meeting an extraterrestrial during a routine spacewalk above Earth.”

Tickets to stream the film may be purchased via the official Silhouettes website using Bitcoin (BTC), Liquid Bitcoin, and payments through the Lightning Network (LN), a layer-two network to support micropayments in cryptocurrencies.

The tokenized tickets themselves give “exclusive viewing rights,” and as NFTs or non-fungible tokens, each represents a “unique” ticket number. In addition to a single ticket, the first 100 buyers “will receive two exclusive digital collectibles to commemorate the film’s release,” the announcement revealed. The first 1,000 buyers “will also receive an NFT,” the update noted.

“Silhouettes is more than a film. It is the first step of a larger, collaborative effort to bridge the gap between entertainment and distributed finance, with the ultimate goal of giving filmmakers financial autonomy.”

Silhouettes’ unique distribution model “empowers creators, enabling them to bypass the high costs and fees associated with a distributor,” the blog noted while adding that Liquid’s native asset issuance capabilities will enable filmmakers to go “directly to the audience and transform how they experience content.”

You may head over to silhouettesthemovie.com for the “perfect start” of a Friday movie night. You only have to maintain a wallet to buy a token and a bag of popcorn “to start your first NFT movie experience.”