Raising Capital on HoneyComb, Wefunder is Now Over $6.2 Million in Funding 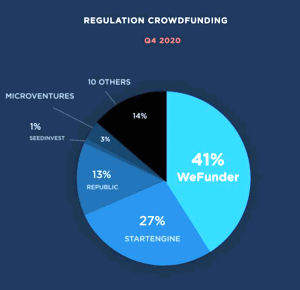 Last March, Crowdfund Insider reported that Wefunder had filed a Form C with the Securities and Exchange Commission (SEC) indicating its intent to raise up to $5 million in preferred equity at a pre-money valuation of $160 million. The document indicated that Wefunder is seeking to sell 485,265 shares at a per-share price of $2.19862.

Today, the offering is live on Honeycomb and appears to be doing quite well having booked $6,281,196 million in a side by side offering (Reg CF/Reg D)

Wefunder claims the title as the leading Reg CF funding portal garnering 40%+ of the market share. Funding volume stands at $200 million annually and expectations are that recent updates to the Reg CF ecosystem will help Wefunder growing even faster.

Of note is the fact that Wefunder reports a net income of over $300,000 for the month of February on $982,000 in revenue indicating the company may be on a path for profitability.

Wefunder has always been a staunch advocate of the democratization of access to capital and investor opportunity and the offering page shares its vision for the future. On the list is a European expansion in the fall of 2021 – once the pan-European crowdfunding rules go into effect. Under the new EU rules, issuers will be able to raise up to €5 million from retail investors across all EU member states.

Additionally, Wefunder is looking to facilitate later-stage funding rounds with more Reg A+ offerings (you can raise up to $75 million) as well as a secondary marketplace, described as a long-term stock market, at some point in the future.

Wefunder’s goal is to make it standard for startups to raise up to $75 million in a pre-IPO on their platform while empowering anyone to invest.