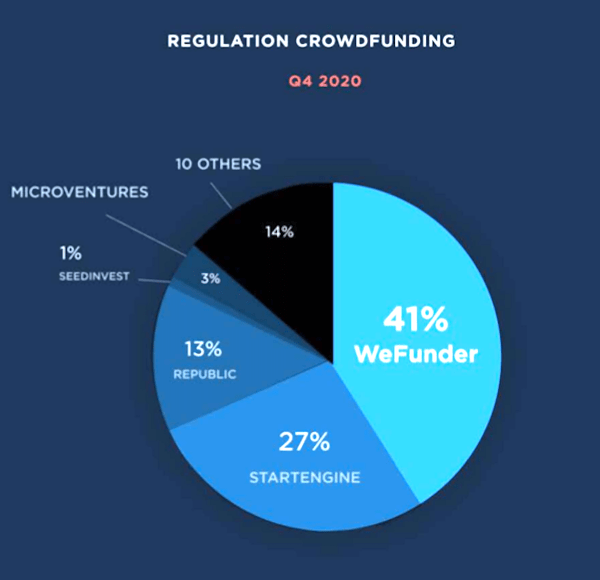 Wefunder, a top funding portal offering securities under Reg CF, has filed a Form C with the Securities and Exchange Commission (SEC) indicating its intent to raise up to $5 million in preferred equity at a pre-money valuation of $160 million. Wefunder seeks to sell 485,265 shares at a per-share price of $2.19862. Any individual investing $1 million or more will receive a significant discount in the offering.

The securities offering is expected to list on Honeycomb Credit, another FINRA regulated funding portal, that is a bank-replacement platform offering small business loans under the Reg CF securities exemption.

The Offering Memorandum filed by Wefunder provides insight into the operations of the platform. In the most recent fiscal year, Wefunder generated $4.24 million in revenue generating a loss of $1.12 million. Wefunder’s revenue almost doubled versus the prior year. As of this month (March 12, 2021), Wefunder reported over $4.3 million in cash.

Wefunder most recently raised $2.5 million in a Reg D offering completed during Q1 2021.

Wefunder is a leader in the Reg CF offering sector. February was its biggest month ever. In fact, just this week Wefunder reported one of its best weeks ever in funding volume.

The securities offering comes at an important time for this sector of finance as the funding cap under Reg CF has received a material increase going from $1.07 million to $5 million. This increase is viewed as driving investment volume to well over a billion dollars for 2021. It should also help drive the Reg CF sector to sustainability.

As the funding cap increased, the SEC also adjusted several other aspects of the ecosystem that make it more compelling for issuers and investors.

Wefunder has long held a mission of democratizing access to capital as well as investment opportunity for smaller investors. As a Public Benefit Corporation, Wefunder has pursued a more altruistic approach to the important entrepreneurial and startup economy.

As was recently reported, Wefunder is investigating the potential to expand operations into Europe – a region that recently approved pan-European crowdfunding rules where an issuer may raise up to €5 million across the European Union.