Garrick Hileman from Blockchain.com Explains how Robinhood Failure was Near “Perfect Advertisement” for DeFi 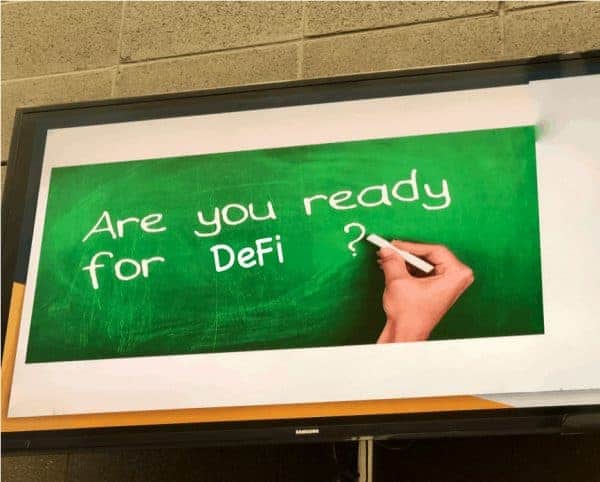 Garrick Hileman, Head of Research at Blockchain.com and visiting fellow at the London School of Economics, says that the future “doesn’t look like Robinhood.”

Hileman writes in a blog post that “disgust over GameStop’s trading shutdown” will most likely accelerate the adoption of decentralized finance (DeFi) platforms. Hileman has also explained how to gain exposure to DeFi investments.

He noted that last week’s “frenzy” around GameStop’s stock (GME) and “firestorm” over Robinhood’s trading shutdown “laid bare real problems with our existing market infrastructure and its lack of transparency.” Hileman confirmed that these issues (which are not really anything new, just a lot more apparent or obvious now) are “part of what historically inspired the creation of DeFi.”

According to Hileman, the Robinhood situation and other chaotic activity in financial markets/trading is “a near-perfect advertisement for DeFi”

Hileman also mentioned that although the GameStop/Robinhood “blame games” have continued and will most likely wind their way to Congress, the “bottom line” should already be quite clear. That being: “traditional market infrastructure failed and outrage over sudden, inequitable trading stoppages in shares like GameStop is warranted.”

Hileman further noted that these issues highlight DeFi’s “promise and inevitability.” He also pointed out that “perhaps one day publicly traded companies may issue their shares in a blockchain native format that can freely ride DeFi’s censorship resistant rails.” He confirmed that the groundwork for tokenized equities is currently being established.

In this new environment, we may have the option to self-custody our digitized shares of a company or business and then switch exchanges “near instantly” in order to stay “nimble” in a global market.

“Imagine if you could send, store or trade a stock in the same way you could exchange a Bitcoin. Once imagined, it is hard to unsee the inevitability of our future financial system built around DeFi. A lot needs to happen before the vision for DeFi is fully realized. Right now DeFi does not by and large offer a way to trade as simply as you would on a traditional centralized exchange.”

But even today decentralized finance protocols are “not subject to ‘unsporting’ (to be polite) centralized trading shutdowns (aka ‘getting rugged’) like we saw with Robinhood last week, and again with CashApp this week,” Hileman added.

While sharing how to gain investment exposure to explosive DeFi growth, Hileman explained that decentralized finance protocols have native digital assets that incentivize or reward users for making meaningful contributions to the market and its financial infrastructure.

According to Hileman, two “promising” DeFi protocol tokens, which are now listed on Blockchain.com’s exchange, include Aave (AAVE) and Yearn.Finance (YFI).

As previously reported, Aave is a “decentralized” non-custodial money market protocol that allows users to take part and engage with the platform as either depositors or borrowers. Depositors offer liquidity to the market so they can earn passive returns, meanwhile, borrowers can get loans in an “overcollateralized” (perpetually) or “undercollateralized” (one-block liquidity) manner.

When users deposit their funds to the protocol, it begins minting or issues a new aToken (somewhat like aDAI), which may then be redeemed for the underlying in somewhat the same manner that various other DeFi protocols currently operate. The AAVE native token is the governance token for the Aave protocol.

Yearn.Finance is an aggregator of several different lending protocols that aims to optimize for the greatest yield. The native token YFI is used for governance-related decisions on the Yearn.Finance network and is distributed exclusively via active participation and liquidity provisioning.

At present, there are around 30,000 YFI tokens in circulation, and they’ve “all been distributed.” Additional or new tokens may only be minted if there’s a new governance proposal (here referred to as the Yearn Improvement Proposal, or YIP) is passed.

“Investing in layer-1 protocols like Ethereum (ETH) and Bitcoin (BTC) is another more general way to gain exposure to the growth of DeFi. As DeFi grows in the form of expanded crypto borrowing and lending, use of crypto trading (decentralized exchanges, or DEXs), and other growth of DeFi use cases, then demand for the ‘substrate’ tokens (eg ETH) that underpin DeFi will also likely grow.”

“Robinhood’s trading shutdown was a wakeup call for many and reinforced our view that now is the time to move on from antiquated centralized market infrastructure. DeFi offers a rare and open opportunity to invest directly in the next generation of financial infrastructure as it is being built. DeFi is still maturing and presents a number of risks, including volatile token prices and hacks that can lead to a loss of funds.”