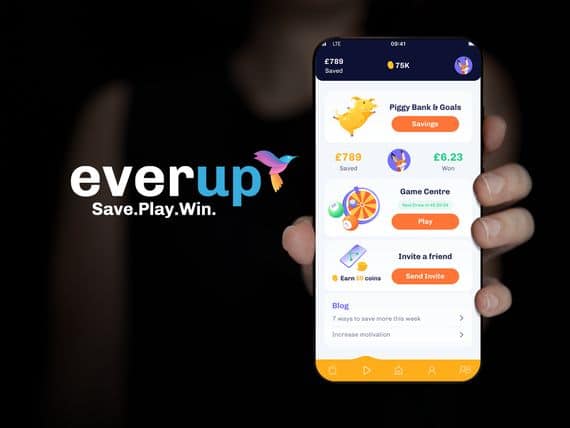 Less than a month after securing £478,889 through its equity crowdfunding campaign on Crowdcube, EverUp has officially launched its prize-linked savings mobile app.

“We envision building over time a full-scale financial hub where our customers can accomplish all types of financial transactions. We will reward them for solidifying good financial behaviours through a prize-linked suite of products.”

EverUp further revealed it has been accepted by the FCA Innovation Hub and has secured FCA approval to act as a registered agent of an EMI. The company noted in January 2021 it is launching its iOS and Android mobile apps in beta.

“A prize-linked saving scheme is the one which underpins the popular ‘Premium Bonds’ offered in the UK by the NS&I. More than 20 million people in the UK hold Premium Bonds, saving roughly £88 billion with them. We’re bringing this prize-linked saving scheme into the 21st century, in a digitally-native format. EverUp helps you build good habits by making you excited to put your money away.”

Speaking about the app’s launch, CEO and Co-Founder of EverUp, Giuseppe Caltabiano, stated:

“There are hundreds of financial wellbeing apps out there which help consumers to save money incrementally but those apps fail to address a fundamental human desire – our need for instant gratification. By rewarding good saving habits with virtual coins and games, EverUp is helping consumers to both save money in a fun way, and get the thrill that comes from playing and potentially winning prizes”.

EverUp is a registered agent of an e-money institution authorised by the FCA and its EMI partner stores customer money with the Bank of England in a safeguarded account, which means it can never be used for any other purposes.